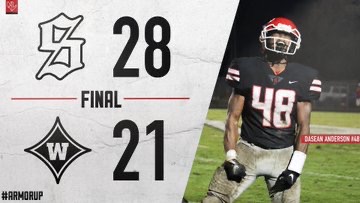 Stratford is 2-1 overall and 1-1 in the region after surviving an overtime battle with Wando on Oct. 9. In overtime, running back Jaedon Alston scored on a 4-yard run and the Knights stymied Wando three times from the 2-yard line to preserve a 28-21 victory.

It was quite the about-face for Coach Dennie McDaniel’s squad after falling 32-10 at Cane Bay a week earlier.

“Definitely we were disappointed with how we played,” he said of the Cane Bay game. “Obviously we were hoping for a better outcome. As the head coach, I take full responsibility for that. I didn’t have our kids ready to play. We talked all week about being physical. I don’t feel like our physicality was where it needed to be.”

The Knights showed off some speed against Wando, too. Receiver Brenden Carter hauled in a 36-yard touchdown pass from quarterback Josh Davis in the first quarter to tie it 7-7 and Damarius Anderson scored on a 96-yard touchdown pass from Davis in the second quarter. Later, return man Jakai Robinson raced 94 yards on a kickoff return to tie it 21-21 late in the third quarter.

Robinson scouted the Knights and came away impressed.

“There was a lot of energy,” he said. “You could tell Dennie had them ready to play. I’m sure they were looking at it like we do. I’ve told my kids you can’t lose another region game if you want to make the playoffs. We’re going back to the 1980s where only two teams get in. You’ve got to win.”

McDaniel said it’s of paramount importance to get the Knights back down to earth after such an emotional victory. They didn’t do that after edging Summerville 21-14 in the season opener.

“Berkeley is definitely the most athletic team we’ve seen so far,” McDaniel said. “They’re probably the best one we’ve seen so far, too. We’ve got to get these kids grounded. We can’t let Wando beat us this week.”

The game-winner gave Alston 100 yards rushing on 21 carries and Davis passed for 140 yards. Linebacker Mason Lord led the Knights with 12 tackles while Jadon Wilcox and Tory Gethers added 11 and 8 respectively. Davis has 579 yards and six touchdown passes on the season for Stratford. Carter has a scoring reception each of the last two weeks.