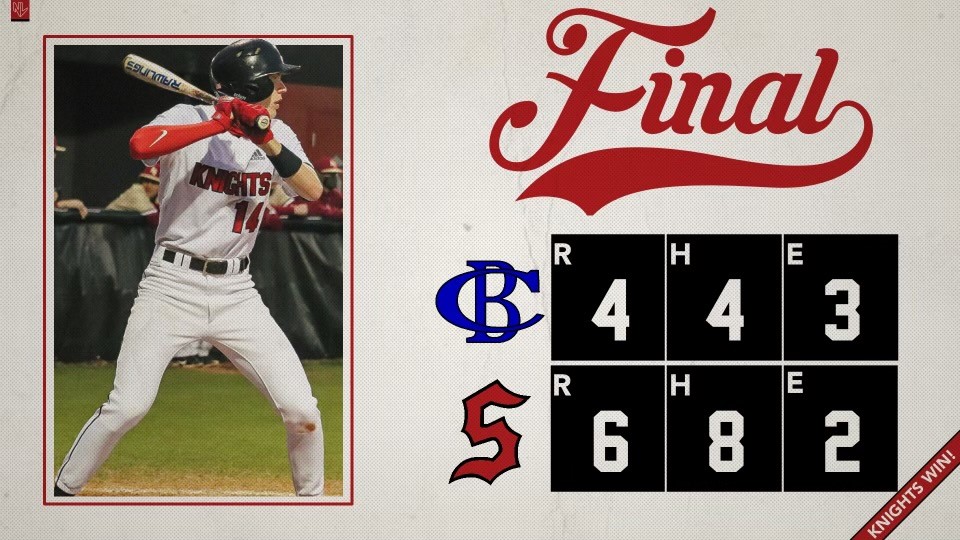 Stratford took an early lead, and held on for a 6-4 win over Cane Bay Monday night. Jackson Blass got the ball for the Knights and the junior competed, allowing four runs, zero earned, on four hits, while striking out seven. He went the distance to earn the win for the Knights.

Stratford got things started in the bottom of the first when Thomas Purcell led off by reaching on an error. With two outs the Knights got back to back singles from Cody Lord and Cole Greer. Lord’s single scored Purcell with Greer’s single scoring Lord. Bryce Robinson would then reach on an error to put runners at the corners. Senior Austin Kling came up with runners at the corners and singled scoring Greer and Robinson, giving the Knights a four run first, a lead they would never relinquish.

Stratford would pick up another run in the bottom of the third on another Kling single scoring Cody Lord. Cane Bay would strike back for three runs in the top of the fourth and another in the top of the fifth to close the gap to one run. Stratford got the run back in the bottom of the fifth. Cody Lord singled to start the inning and was moved over by a Greer sacrifice. Bryce Robinson would then single scoring Lord, giving the Knights a 6-4 lead.

The Knights improve to 1-0 in the region. They are back in action Wednesday at Cane Bay. First pitch is scheduled for 7:00 PM.