STRATFORD AND THE ATHLETIC DEPARTMENT ARE PROUD OF OUR CURRENT AND FORMER ATHLETES. WE HAVE ATHLETES LIVING SUCCESSFUL LIVES, AND ACCOMPLISHING GREAT FEATS IN THEIR PROFESSIONAL ENDEAVORS. WE ARE PROUD TO SAY THAT WE HAVE SEVERAL ATHLETES STILL INVOLVED IN ATHLETICS THROUGH EITHER COACHING OR PLAYING AT THE HIGH SCHOOL, COLLEGE, AND PROFESSIONAL LEVELS.

If you are an alumni athlete please fill out the attached form and return it to the Stratford Athletic Department in person, or email it to beckmanb@bcsdschools.net 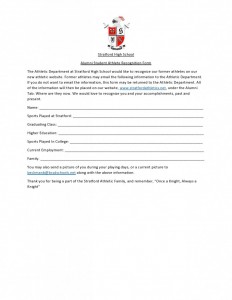 Masters from The Citadel

Director of Internship Program at the College of Charleston 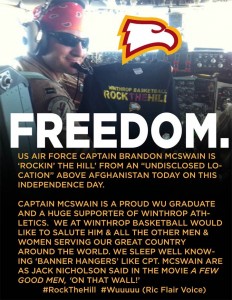 Winthrop University, BA, Sociology with a Concentration in Criminology, Class of 2004.
Norwich University, MA, Masters of Military History, Class of 2013.
Major Brandon McSwain proudly serves his country as a pilot in the United States Air
Force.

Operations Manager at A1 Heating and Cooling

Mr. Collins has a wife, Andrea, and son Braydon

2007 Outdoor: NCAA Regional competitor in the 400 meters during Outdoor… Big South Champion in the 400… Set meet records at Big South Outdoor Championships (54.57) and Battle of the Beach (57.03)… Her 54.57 at the Big South Championships is also a new Coastal record… Member of the Big South Championship 4×400-meter relay team that ran 3:45.23, a new Big South Outdoor Championship Meet record… Member of the sprint medley relay team that ran 4:03.42 at Penn Relays…
2007 Indoor: Big South Conference Champion in the 400, setting a new conference and Coastal 400-meter record during indoor with a time of 55.71… Earned All-Conference honors in the 200 and 400… Finished second in the 200 behind teammate Chasity Johnson to help Coastal to a 1-2 finish, running a season-best time of 24.86… Won the 400 meter dash at the Maryland Terrapin Invitational (56.17) and was second at UNC Fast Times (56.85)…

Basketball, Baseball, Football and Stratford Athlete of the Year – 1997. Member of the 1996 Baseball State Championship Team.

Played Basketball at Johnson C. Smith University 1997-2001. Was a 4 year Letterman and 3 year starter. Was the captain on the first every CIAA Championship team in 2001 and played in the Division II Elite 8. Won the second most games as a class in school history (84).

Married to Milan Johnson-Wade since November 5, 2011 and we have 2 kids (Riley Wade and Parker Wade) together. I also have 2 older daughters (Ja’la Wade and Toni Wade)

Wrestled and played football for the Knights

Currently a Senior at Newberry College where he wrestles.

Wrestled and played Tennis for the Knights. Rookie of the Year and a 4x State Qualifier in Wrestling

Served in the U.S. Army, and currently is employed by GRSI- Government Contracting

Wrestled and played Soccer for the Knights

Currently works as a Police Officer

Wrestled for the Knights, was a 3x State Qualifier, and a 4x Freestyle State Champion

Currently employed by SAIC, Also the Director of the Summerville Takedown Club

Married to Brie Grady, and the couple has two children,a daughter, Peyton, and a son, Austyn.

Wrestled, ran Cross Country, and ran Track for the Knights

Currently employed by CSU and the North Charleston Police Department

Currently employed by the City of North Charleston

Wrestled and played Football for the Knights. Was a 4x State Runner-Up

Currently training to become a City of Charleston Firefighter 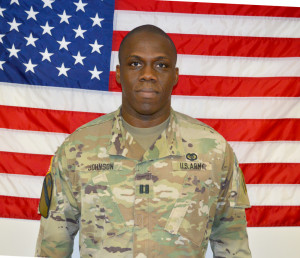 CPT Chris Johnson was educated through the Berkeley county school system and is a 1993 graduate of Stratford High School where he was the running back for the Stratford Knights football team. Also in 1993, CPT Johnson was the S.C. High School Track & Field State Champion, coming in 1st place at 48.74 seconds in the 400m. From 1994-1996 CPT Johnson was a nine times Track & Field All American in the 400m, 600m (indoor), 800m, 4x800m, and both sprint and distance relay medley relays while attending Florida Community College, Jacksonville, FL. He later transferred to Life University, Marietta, GA where he graduated with a Bachelors in Business Administration in 1999.

After graduating OCS in 2010, the now 2nd Lieutenant (2LT) Logistics Officer’s first assignment as a commissioned officer was under the 43rd Sustainment Brigade out of Fort Carson, CO. He later was deployed to Afghanistan in 2012-2013 in support of United States Central Command (CENTCOM) Materiel Recovery Element (CMRE). Afterwards he attended Captain’s Career Course in Fort Lee, VA, then completed a successful tour in Command at Vilseck Germany.  Now CPT Johnson is in Command in Richmond, VA.